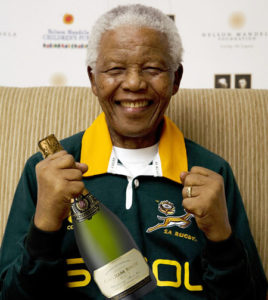 US President Barack Obama is, by all accounts, a discerning, and moderate, wine drinker. And his palate runs to South African wine too, as his choice of libation on election night was a bottle of Graham Beck Brut NV – the same beverage with which Nelson Mandela toasted his inauguration in 1994.

According to Graham Beck Wines, Obama developed a liking for the sparkling wine back in February 2008, after he took his wife Michelle out for dinner to celebrate his intention to run for US president. On the sommelier’s recommendation, the president-to-be ordered a glass for him

and his wife, and was apparently so impressed with the bubbly that on election night, 4 November 2008, he had six bottles standing by.

Sales of the product have increased dramatically, according to reports. A wine merchant in the Chicago area told the Chicago Tribune that she sold her entire stock of Brut NV very quickly, once it was known that the presidential couple had developed a taste for it.

“I am honoured that the Obamas chose our non-vintage Brut to toast their historic win,”

said a thrilled Graham Beck cellarmaster Pieter Ferreira, speaking to Wine.co.za. Ferreira was reportedly in Chicago on a marketing tour during the election.

“I always hope people choose to celebrate important milestones with our Graham Beck Cap Classique wines, and this is certainly a momentous occasion,”

he added. “Sales are going well for the Graham Beck Brut in the US.”

With only one million cases of wine exported to the US every year, that country is not the strongest market for the South African wine industry, said Su Birch of Wines of South Africa (Wosa). “We have a small market share, less than 2% of imported wines. However, our premium wines, such as Graham Beck and Rustenberg, are doing really well there.”